Lost in the background...can't figure out which way is up.

As I drove to the grocery store on Saturday morning in the 27º temps, I went through an intersection and there was a familiar homeless woman at her usual spot.  She was covered in plastic, her usual outfit, rain or shine, hot or cold.  Even her head and face are always completely covered.  I passed her quickly as my lane was moving through the intersection, but I could see her moving her arm and legs in what I can only assume was an attempt to keep herself the slightest bit warm.

I feel sad that I did nothing at the time to support her in any way.  I didn't offer her a ride, didn't give her cash, or even give her some of the bounty I'd just gotten at the store.  I still see her in my mind's eye...no face as it is always obscured by her protective plastic layer, instead only her wiggling limbs.

And I must have been only one of hundreds who saw her that day, and for the vast majority she was likely lost in the background of their commute.

As I painted in the warmth of my home later that morning I pondered a painting I'd picked up, tweaked, put down, and reworked over a period of a few weeks.  It was intended to be a background with something added to its surface that would be the actual focus, but every time I looked at it I got lost in the background.  Lost in a good way.  And then I found I had no idea which way was up.  So I opted to leave it as is, unsigned, anonymous.

And then I thought of the anonymous, shivering lady in plastic, lost in the background...and I wondered if she sometimes can't figure out which way is up. 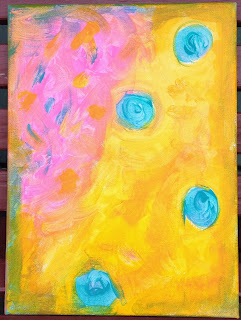