What can I say...if you know me, you know I've loved possums since I was a kid.  I think they're absolutely, fabulously beautiful.  Even the big "ugly" ones when they're hissing.  Simply exquisite!  When I was twelve I found two young abandoned possums, sequentially, not at the same time.  I LOVED them, and in my twelve-year-old clever style, named them "Possy" and "Opie".  I hunted food for them (lots of crickets, roaches, and even a lizard!), I carried them everywhere I went, they sat on my shoulder as I practiced french horn, we were inseparable.  Possy, my favorite of the two, had a missing finger on one of her hands.  It was dried and shriveled when I found her in the middle of a field, playing possum, of course, and it soon fell off.  She required bottle feeding at first as she was too young to eat solids, but as she grew stronger she was delightfully ravenous and it became clear that she was fit to be with her fellow possums.  A date was set for Possy to be released into the wild, but lucky for me she bit my hand and drew blood...I was SO happy because this meant I was able to keep her for two more weeks while she was quarantined just in case she had rabies.  It was the best quarantine ever for a critter as nothing in our routine changed (except for the fact that I CONSTANTLY tried, unsuccessfully, to get her to bite me again).  Her quarantine ended quietly and we released her in Wild Basin where I imagine she lived out a wonderful life.  For years after when I'd see a possum cruising around, I'd look at their front feet just in case there were only four digits on one of them.  Have to admit that 32 years later I still take a gander when the opportunity presents itself.  Old habits die hard. 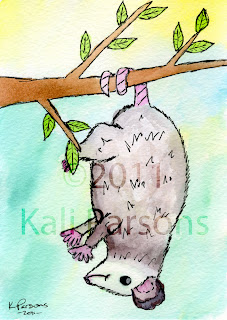