Up the Hill from ACL

Woke up this morning with my right arm aching.  Spent part of the morning wondering what the heck I had done and then I realized that it was from stirring batch after batch after batch of chocolate chip cookies for my kid's lemonade, etc. stand.  My Kitchenaid mixer sits quietly atop the fridge collecting dust because this girl LOVES a rubber spatula and a bowl.  I bet he sold 100 of my cookies to ACLers!  He and a couple of his friends were amazing salesmen, totally unafraid of talking strangers into spending some cash and they also got the fact that being funny gets customers to come your way.  Fave moment of the weekend sales?  Definitely when the Hey Cupcake truck could be heard, twanging some ice cream truck tunes, coming up the hill toward our house.  My kid grabbed some cash and waved it in the air as the truck approached, and yelled, "We have money, we have money!!!"  The Hey Cupcake truck parked right in front of our house and the boys each bought a beautiful cupcake.  The cupcake dude attracted a few more customers and sold more cupcakes, then those customers bought drinks from my kid's stand because, well gee, cupcakes make you REALLY thirsty.  THEN the cupcake dude got out of his truck and bought stuff from my kid.  Super cool of him!  I'm officially a Hey Cupcake fan...not that I'd ever actually eat one, though.  :-) 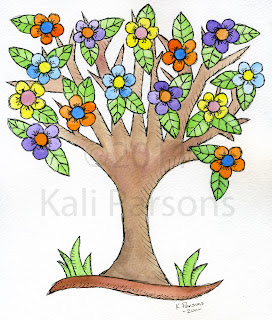 The rain made me really happy!