I have never understood why anyone...ANYONE...would want to go back in time and relive their high school years. Geez, the most insecure, confusing, pimply time fraught with jealousy, gossip, and cliques. Ay, yi, yi! Now, to go back and be four again, that's where it's at. I have the great pleasure of working with and around four-year-olds five days a week, 9 months a year. I think it pretty much rocks to be four!

Magic is absolutely real, you're utterly and completely immortal (if you ever even give death a thought at all...probably not); you're at your peak cuteness, EVERYTHING you do is cute, even tantrums; you don't stink unless you poop or are working up to one; if you happen to pee your pants because whatever you're doing is simply too cool to walk away from, it's no biggie because someone always has extra clothes there for just in case. If you're on a soccer team everyone loves when you run after the ball as a mob of four-year-olds, or if you decide that the pretty flowers and butterflies are more interesting than the game your parents find that just as video-worthy as making a goal. Even schools understand that you should be learning through play. Man alive, four-year-olds have got it made in the shade.

Yeah, I think going back and being four again would be awesome. And, bonus for me, as much as I absolutely love and adore my baby brother these days (I was QUITE grouchy when he showed up on the scene when I was five-and-a-half and all the adult attention was suddenly divided), it would be wonderful to have a year-and-a-half of only childness again. (Love you, Vince!) 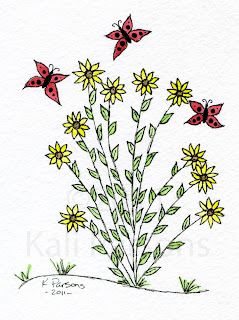