Yes, it's official, I have abandonment issues.  Who knew a trip to Costco would bring out such intense feelings?  Dave and I went shopping and, as we left the kids home, it's an assumed date, right?  So, I'm expecting a lovely stroll through the aisles, light conversation about anything but our kids.  But, no.  I knew something was awry when we entered the parking lot and had to park in a galaxy far, far away.  We made the trek to the front entrance and there were only two carts left...TWO!  With cart in hand, we made our way in and b-lined it to the electronics department (we'd agreed to go in halvesies with the big guy on a hard drive).  First thing on our list crossed off, check!  Dave left to find the bathroom and I headed to the food section.  Plan was he'd catch up to me when he was done.  Um...right...here's where it all fell apart.

You see, Costco is basically a free buffet on the weekends.  Hair and beard-netted folks seduce you with sizzling sausage, delicious spreads, crunchy snacks, and on and on.  Dave had made the cardinal shopping mistake...going grocery shopping on an empty stomach.

Did that guy catch up to me as I wandered up and down crowded aisle after crowded aisle?  Rather than a companion, I have to say he was more of an annoying little gray haired gnat that kept doing fly by after fly by, barely slowing down to say he'd sighted yet another sample on the horizon before he buzzed off again.

OK, OK, I can't really fault him too much.  Had I been hungry and had there not been an unusually high number of vitamin K-containing samples, I probably would've joined him.  But, then I wouldn't have had this to write about and I'd have to resort to the story about my puppy's personal problem...savin' it for tomorrow. 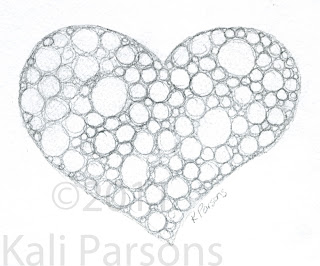 Fun with pencil.
Posted by KALI PARSONS at Sunday, February 05, 2012