In Need of a Bravery Boost

You see, last night someone remotely unlocked their car at the exact moment we were passing by.

Hazel levitated and somehow managed to jump sideways, directly into me, before the car had even finished it's noise.  After much reassurance she was good to go...for a while...until we passed a bush that first began swaying, then began rustling, then began shaking outright, and then the tiniest little bird flew out of it.  But Hazel never knew about the bird because she'd already pulled too far away.  In her mind there was a grizzly monster with fanged teeth and a most foul smell coming after her with only thoughts of doggie digestion on its mind.

Hmmmm...maybe I need to get some of my bigger-than-me guys around her to start walking her.  I'm sure that'll boost her bravery, right? 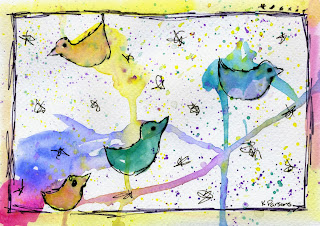