In Parsons tradition, we didn't decide if we were even going to dress up for Halloween until the night of. Well, with the exception of my little guy who brought home his football helmet because he thought he might want to use it as part of something.

Dave and little dude: "We need costumes!!!" Gee, turns out I'm the "go to" girl for such things.

Dave was first. "Well, do you want to wear some of my belly dance stuff?" His enthusiastic response lead to a sequined bra top, socks to fill said top, a veil as a skirt, a wrap around the veil to snazz it up, and a hip skirt on his head. Voila! He's was GORGEOUS! Well, sort of. Lots of complaints about sequins being scratchy and such (I get it, I can't handle womanly clothing like that either) and suddenly the outfit was off. Thankfully not until after I'd taken some pics and posted them on facebook. :-) OK, back to the drawing board. He pulled out a red and gold vest that used to belong to his grandfather. I was asked to find what else would go with it. Um...OK, back to the belly dance chest for some purple velvet leggings that were losing their elastic so I didn't mind him stretching out and ruining. I must say, here, that he looked pretty hot in them! Shoes? Well, cowboy boots, of course. Duh! He thought it was still lacking something, so we added a lovely fuzzy scarf of mine and his amazingly long elf hat. Ta-da!!! OK, Dave's finished, check! I think we spent about 20 minutes on each outfit, but I'll only count one because that's all he used.  And what was he?  A "Ballet Parking Attendant," of course!

Little dude was next. OK, well, just what goes with a football helmet? Hmmmmm... Well, maybe a cape? "No." Maybe a clown outfit? "OK." Yay, we were getting somewhere, and fast! I pulled down the bag of clown outfits my mom made or bought for me as a kiddo. First one was WAY too small. Second one fit, but, I must say, it was slightly rude to his hind quarters. He went for it anyway. OK, little guy was finished, check! That only took about 10 minutes! I was rockin' it!  The Football Clown was in the house!

Me. Jeez! I went to my closet and stared. Nothing! I pulled out some overalls just to see if something came to me as they've been the "go to" base of many a costume over the years. Idea!  I ran to my computer and googled pics of Pippi Longstocking. OK, I had a mission! I dug out my two pairs of striped high socks, put on one of each. I tried the overalls and it just wasn't right. Back to staring at my closet. Ah ha! A dress I had grabbed at the elementary school's clothing swap. I had never even tried it on. Happy to report it fit and it was just good enough to fly as Pippi's dress. I slid on my black Ropers and looked in the mirror at my limp pigtails. They were in serious need of Viagra. I found my fix in a wire coat hanger. A little shoving, a little bending and I was seriously rocking some amazing Pippi braids. It took me about 20 minutes. Whew!

So, in under an hour I had us all looking Parsons fabulous! I love Halloween!!! 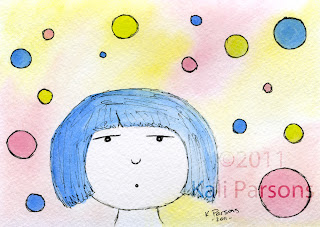