After having our dog, Hazel, for over five months now, today I washed her for the first time.  Now, she's been washed, a bunch, but it's always been Dave doing it.  Really I don't feel bad having not done it, after all, I spent four-and-a-half years of my life nursing our children...gotta count for something, right?   And, actually, I washed both Scout and Hazel tonight.

Scout?  Well, she's easy peasy coconut squeezy.  You just call her into the bathroom and tell her to get in the shower and she walks right in.  She turns when you need her to, lets you pick up all of her legs without fuss, tolerates a rigorous face washing without protest, and turns into a sweet loving furry mush when you sing her little puppy love songs.  Hazel stood at the bathroom doorway, head rounding the shower door, and watched the fine example that Scout was.

Hazel?  Well, Dave doesn't call her "Donkey" for nothin'!  That girl!  Stubborn!  I tried talking nicely to get her in the bathroom, but ended up doing a half push/half pull method to get her in there.  Once in she tried repeatedly to get out.  I cornered her in there, telling her what a sweet dog she was, all the while, and then I turned the water on.  Oh, my goodness, you'd think I'd unleashed a thousand cockroaches to crawl all over her what with the major case of eeby jeebies she got.  I brought the shampoo out, squirted her back with it, and that girl, true to her "Donkey" name, sat down in protest.  I tried raising her and turning her about, but she remained in her intractable position, and, well, I worked around everything as best I could.  Sweet Scout, in her awesome protective big sister way, stood at the doorway, her head around the shower door, keeping tabs on the spectacle.  I caught her eye and I swear she gave me an "I was never, ever quite like that, was I mom?" look.

Me:  "Yeah, Scout, that's one of the best things about being a mom...you mostly forget the hard times and let the good times fill up all the memory spots....mostly." 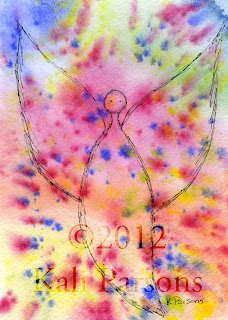