Been reminiscing about my little guy after finding (well, re-finding) an old photo of him.  He had been "inked" all over by his big brother, who clearly has mad drawing skills.  They both came out of the bedroom/tattoo parlor, faces beaming, SO proud of their work.  Yeah, we documented the heck out of it.

That little guy, who thought his super powers came from his golden tresses, is now a big dude, whose super powers mysteriously remained even after a drastic haircut, with a very deep voice...which he uses often to tell me this as he follows me around, stalking me, because, obviously, he loves me so.


"You're getting smaller mom."

"Really, why are you shrinking, mom?" 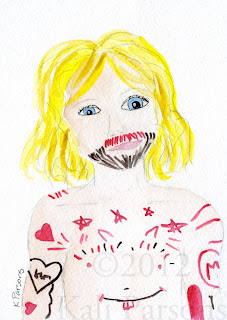