Gosh, are we internet dependent or what?!?!  Here’s what happened today…our internet was going ssslllllooooooowww.  Discussions were had, possible solutions were considered, plans were implemented.  Then…suddenly…we had no internet service at all.  So what did we all do in such a panic situation?

Me:  I went to sleep.  I’d been up since 4 AM when my big guy woke me up making a Hot Pocket.  That and I had some very important fairy business to take care of early today.
Little guy:  He settled in with some TV.  Not sure what, I was asleep after all.
Big guy:  He fell asleep after watching said TV…after all, he’d been up till 4 AM.
Dave:  He’s the one we can count on.  He set about solving the horrific circumstances were all now forced to endure.  He talked at length with technical folks.  I’m in awe.  Me?  I’d probably just decide that the internet was finished for the Parsons, forever, and leave it at that.

I woke up an hour-and-a-half later and stumbled around (I’m super dippy after I take daytime naps) and settled in at the table to do a little painting.

Well, I’ll tell ya what.  Big guy went back to sleep and the rest of us loaded up our laptops and booked it over to a coffee shop…with wifi!  And some rockin’ live music. 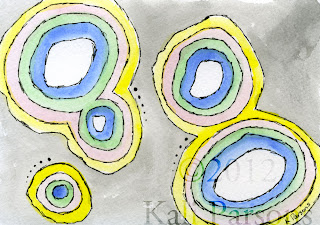