Trick or Treat, Smell my Feet

A few years ago I drove to California with my big guy and little guy.  What do we remember most about that drive?  The Grand Canyon?  The Petrified Forest?  The Mohave Desert?  Those pale in comparison to our two most significant memories.


#1 The bras all over the highway in Bakersfield, CA...surely a Victoria's Secret truck had dumped its over-the-shoulder-boulder-holder load!


OK, the first was awesome...we pretty much loved that!  The second, well, we remember it so clearly because it was traumatic in its horribleness.  The quick story is that we were driving along and I smelled something.  Something indescribably foul.  I looked to my big guy, who was seated beside me, and saw that he had taken his shoes off.  Well, I jumped all over his case for having stunk up the car...again (this was not the first episode, but it was decidedly the worst thus far).  In dramatic form I rolled all the windows down, and was hit in the face, hard, with an even worse smell.  We rounded the bend and came upon what I can only assume was a slaughter house.  There were thousands of cows, all crammed together, on what must have been mounds of their poo.  OMG!!!!!!

So, I have to say I think I have mild PTSD from this experience and I get jumpy now when people take their shoes off in my presence.  I dare not breathe with my nose.  I was just beginning to show some small signs of improvement as I've not encountered slaughterhouse feet in quite some time...until a few nights ago.  We were driving in the car...and there was that smell.  Big guy was not with us.  Dave looked well groomed and recently bathed.  I turned my head as I saw an aberrition out of the corner of my eye.  Little guy had his shoe up on my seat back.  His tied shoe.  His shoe that was still on his foot.  I swear the air around that shoe was blurred by scent waves escaping from their canvas prison.  I was in olfactory hell!

So, little guy was stuck being bare foot for two days while his shoes took up residence in our washing machine...I used the "exorcist" setting...high heat, demonic smell out...three times.  Phew! 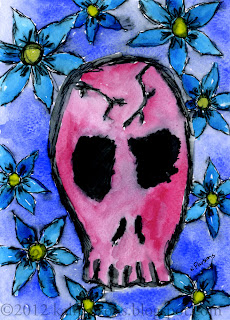