Heroes Coming out of the Woodwork

I have this awful habit of finding wee little injured critters.  It's a bit of a love/hate thing for me.  They are absolutely adorable, but the heartache involved is a bit exhausting.

As a kid I stumbled upon (literally, folks, I actually tripped over them) two injured opossums at two very different locations/times.  They were teenagers and had a fighting chance at survival.  We contacted the rescue folks, learned all about how to nurse them back to health, and had the pleasure of possum pets until they were big and strong enough to be released back into the wild.  After that my luck has been poor.  Multiple rescued birds that have lived less than an hour.  An opossum I found about a year ago at the school where I work that was so infested with fleas that it was terribly anemic, and it died the night I brought it home.  (Weird factoid...when a flea-infested animal dies, fleas bale big time.  It was something to behold.  So glad it happened outside as I held it when it took its last breath as I rocked on our porch swing.)

So, tonight when I found a baby squirrel I was both excited and filled with thoughts of "Why me?!?!"  First thing I did was make sure all of our animals were in.  Second thing I went out to look for a possible nest site.  Third thing I narrowly avoided being side-swiped by an adult squirrel.  I can only image it was a parent in the midst of freaking out.  Fourth thing I went in to do research.  Fifth thing I moved the baby to a spot where the parents could find it.  I waited about an hour with no results and the I moved on to the sixth thing, bringing it in to warm it up with my body heat whilst I did more research.  My little guy did a shift, too, as it's rather hard for me to do Google searches one-handed.  Seventh thing I called 311 to ask for help (wish this would've been my first thing because the Wildlife Rescue place was already closed by this time...but I'm not willing to feel guilty, I did my best, people).  Eighth thing I begged my facebook friends for help.  Man, that so rocked!  Helpful heroes left and right!!!  Ninth thing put the little fella in a high walled box with some rags for warmth and tied it up in the tree with the suspected squirrel nest.  Tenth thing made a plan to take it to a wonderful friend who had generously offered to take the little critter on and also offered some great info.  Totally a hero in this story.  Eleventh thing followed wonderful friend's great info by asking my wonderful (and very brave and quite good looking) husband to get to the tip-top of a tree, see if the nest I suspected was indeed a squirrel nest, and place the baby squirrel in the nest.  And he did!!!  Course there was that moment of confirmation when the adult squirrel jumped out of the nest and leaped to an adjacent tree.  That bit was scary, but it also filled us with great hope.  Dave delicately worked his hand into the nest, gently placed the baby in there, and came back down.  My hero!!

Now we will let Mother Nature take back her ownership of this situation.  I wish that little one the best of luck.  And you better bet I'll think that teenage squirrel I see in a few months is the one we rescued.  Darn tootin'! 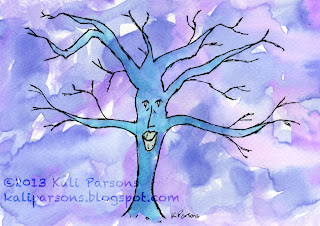