I had the occasion to wear make-up for the first time in forever yesterday.  And I'm not counting the times I've worn make-up on Halloween or the very occasional dance performance.  Those don't count.  Anyway, I realized that morning that the only make-up I had was some very old Mary Kay I'd bought about fifteen years ago...it was still fine, but it was just blush and eye shadow.  I had an old, old mascara...a big no-no, right?  I mean aren't those things breeding grounds for bacteria over the years?  And I'd given all of my lipsticks to my mom when she was in the hospital not too long ago.  So, the mascara was tossed and the Mary Kay stuff set aside somewhere where I wouldn't forget for the next few hours, and I headed off to Target.

And I was clueless.

I meandered around the make-up section, both unsure of what I even needed and determined to find products that weren't tested on animals.  Not the best combo for a quest in a big ol' mainstream store.  But there it was, amongst the Revlon and L'Oreal, a brand made exclusively for Target that does not test on animals (Let me go on ahead and plug Sonia Kashuk since I mentioned those other guys).  I was half-way there, people.  And then the guesswork began.  I picked this and that, tossed them into my bag, and headed home.

Where I discovered a couple of new-to-me things.

1.  Eye liner comes sealed for my protection...so sealed that it took me about ten minutes to get all of the sealing off of the darn thing.

2.  Mascara (all of them?) comes with a little eyelash comb.  I had no idea that eyelashes ever tangled, but I went on ahead and combed mine, by golly.

I even did my hair and wore my contacts.  Had a real girly moment, people.  Might just be inclined to do it again sometime. 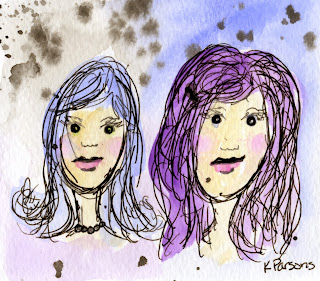