I came to a stop at an intersection the other night.  There was a fella there hoping to get some spare change.  Only he didn't have the cardboard sign I've become accustomed to.  And, gosh, writing that I'm "accustomed" to it makes me a little sad that it absolutely, positively doesn't strike me as odd or unusual to see yet another homeless person around.

Anyway, this fella was wearing a big, red oversize T-shirt that read "SIX PACK COMING SOON".  My first thought was, "Wow, is he just being honest?"  And then I thought, why on earth would this guy have spent his hard-earned money on that shirt.  OK, I suppose it was possible, but then I began to wonder if someone had given him that shirt...you know, as a joke.  And then I saw his smile.  His big, wonderfully goofy smile, and then I didn't care any more about how he'd gotten the shirt.  I just knew that this guy was able to find the silver lining, the happy, the whimsical in the package he was presenting.

And then I wished I'd had a dollar to give him. 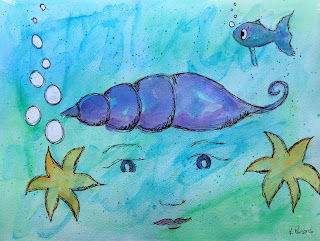