Poor Hazel.  Since being spayed yesterday, she's been stuck with the dog's most hated accessory...the cone of shame terror.  She doesn't know what to make of it.  Except for that it is bad.  Very, very bad.  And she must have done something absolutely terrible to deserve such a thing.  Me thinks she thinks we've stuck her in the corner with a dunce cap upon her head.


So, here's what our sweet Hazel is able to do with the cone on:

- stand perfectly still pretending to be a statue so the cone won't notice and eat her alive.
- drool...a lot.


Here's what she can't do with the cone on:


P.S. We do give her regular cone break eating/drinking opportunities, so please don't think we're meanies.  And...I think that maybe, just maybe, she's considering taking a step or two with it on...maybe. 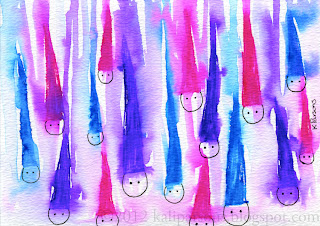 Thank you ever so much for "liking" my blog on facebook!
Posted by KALI PARSONS at Thursday, June 28, 2012