Seems I have the pleasure of calling 911 more often than I'd like.  I'm one of those folks who calls if a Christmas tree has fallen off of vehicle and is blocking a lane on the highway, if a mentally ill lady barges into my house (it's happened), or if I'm just concerned about someone's safety.  That's what happened last night as the little guy and I were heading home from the grocery store.  We turned onto a street right near my house and there was a gentleman, must've been in his late twenties or early thirties, standing right in the middle of the lane.  He had such a look of confusion and angst that it broke my heart.  And I'd seen him before on multiple occasions in the area.  He stumbled out of my way and I kept going, but had my kid dial 911 for me so I could report what had happened.  I'm all about stopping and helping someone myself when I don't think I'll come up against anyone/anything dangerous, but this didn't have that danger-free vibe.

Anyway, I made the call, reported what I had seen, and that was it.


When we got home my little guy and I just sat in the car.  I think we were both reflecting on what we'd just experienced.

Me:  "I also feel such compassion for people like that guy.  You know we're only one or two brain clicks away from being just like that...just one or two harsh life experiences and we could be them." 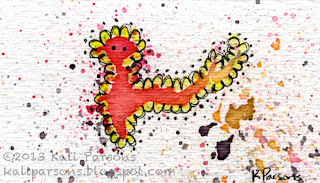