Tell me again why the chicken crossed the road....

Had one of those weird days where I figure I must've activated the cloaking device on my Prius.  I had two separate groups of young adults walk directly in front of me when I was driving.  Had to slam on my breaks twice.  Both times the groups looked up at me, shocked.  I like to think that at least one of them was thinking, "Gee, I guess at least one of us should've taken the time to look both ways."

I'm happy to report that no one in either of the groups was distracted due to looking down at an iPhone or anything like that...pretty darn sure they were lucky that the person who ended up responsible for their fate (me!) is someone who would never do that either.

As I got back into my neighborhood and felt I could exhale from the near misses, I came upon a fella who looked like he was going to continue the trend and just walk right out in front of me, too.  I slowed down and as I approached him he smiled really big at me and fake jumped at my car.  I flashed him a smile and a peace sign (hey, he looked like an old hippie...and, you know, I'm all about peace and stuff).  I'm guessing he was the universe's way of letting me know that my cloaking device had been disengaged.  Whew! 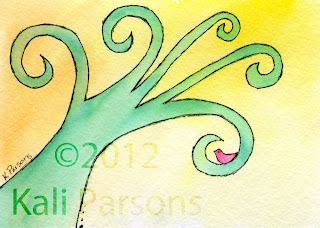