Apparently tastes change frequently, particularly when you're a puppy.  While socks were simply divine before (they are SO last week), now underwear is pure bliss.  The laundry basket is this little doggy's oyster.  Came home today and on each dog bed was a pair of little guy's boxers.  I'm unsure of their clean/dirty status, but one can certainly make assumptions.  The puppy sat near one and Scout had this total, "It was the puppy's idea" look on her face.  Hilarious!  This was all fun and amusing till Hazel happily trotted out of my bedroom a couple of hours later, her ears bouncing with each step, carrying a pair of MY underwear (one of the nice ones, no less!) in her mouth.  Hmmmm...Kali is no longer amused! 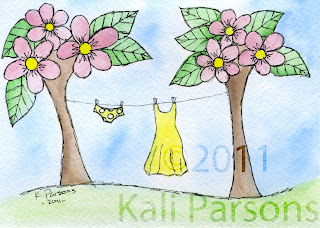