So I was driving around with my kid today and I declared to him, "I think I'm going to try to stop using bad words."  I got a resounding, "uh-huh" from him.  Gotta love a vote of confidence.  But really, I don't say bad words terribly often, and I always, always use them appropriately.  I'm just finding that they're not as effective as I once thought they were, though I still find the use of them to be quite therapeutic.  Hey, maybe I need to come up with a new behavior to replace my language issue.  You know, like gum chewing for smoking cigarettes.  Hmmmmm....

I could do the old standards, put a rubber band on my wrist and snap it hard every time I make a poor choice of utterances.  Or I could have a jar on the counter where I have to put some money in every time I spout off.  I don't think I would follow through with either of those, though, as I'm not into self injury and I'm really tight with a buck.  I think it'll have to be something that I don't really want to do, but also something I don't totally mind doing, and something I'll definitely benefit from.  OK, here's the deal.  Every time I use profanity (and get caught), I'll drop and give ya 10 (don't even think about suggesting 50!).  And ya know what?  I bet it'll be so effective that the next time you see me you'll say, "Check out the effin' guns on that chick!!!" 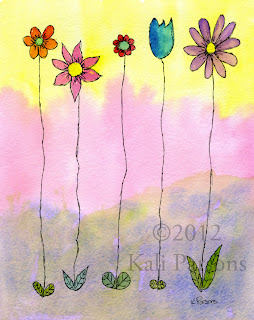