To quote my dad, "It's Rocket Science!"

Does the fact that events that crush children's dreams gives me great pleasure make me a horrible person?  It's not as bad as it sounds...I think...I hope, anyway.  I spent the day at a ranch near Fredericksburg at a rocket launch.  The participants were all teams of high school students who have been learning all about the science behind rocketry and had created their own VERY large rockets, some of them designed for transonic flights, and today was the big day to see if their rockets would indeed fly and be recoverable.  I patiently videotaped each and every flight.  First one was fine, went straight up, deployed its parachute, then gently floated down.

The next flight was "better" in my eyes.  It went up, then went down, down, down, down (oops, where's the chute?), and CRASH!  Rocket guts went everywhere!  OK, I was getting excited!!!

The next rocket sat on the launch pad.  This one was black, Stealth Fighter black.  "Ominous" was seriously its middle name.  10-9-8-7-6-5-4-3-2-1-LIFTOFF!  It went up, but not far, and an "event" happened.  That crazy rocket split right in half and the cone fell to the ground pulling the still folded chute out of the remainder of the rocket...which, by the way, was still going up...sort of.  By "sort of" I mean it screamed, yes, it screamed, twisting and turning, and then started going sideways, still apparently accelerating, and the crowd had no idea if it was going to turn back toward us or, hopefully, crash safely a distance away.  Which it did.  Whew!  All caught on video, I might add!

So, were those high school kids' dreams crushed today?  Well, perhaps.  But just so you don't think I'm the meanest person on the planet, you've never seen kids beaming so brightly as these did as they returned to mission control holding shards of what was once their rocket.  I'm thinking an awesome crash is almost as good as a "perfect" flight.

It's rocket science!  Back to the drawing board! 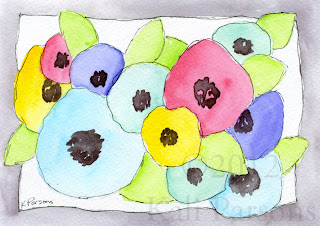