He's Studly and He Knows it

Historically speaking, I'm the one in our home who ends up picking up the dead critters found in the yard.  The half eaten rats, the feather explosions that most birds end up being after a battle, many snakes and lizards, and even an owl.  Not sure how it came to be that I was the informally elected mortician, removing bodies from the scene of carnage, it just turned out that way.  So, tonight when Dave was sitting on the porch swing and noticed a dead squirrel in the middle of the street, of course he suggested that I take care of it.  Well, this time I said, "Huh-uh."

He's a trooper.  He hopped right up and and grabbed a piece of bamboo from our yard (men love tools, ya know).  Clearly the man had a plan.  Well, in case you've never tried to pick up a rigid dead squirrel with one stick, I'll tell ya this.  It's not possible (though it's rather amusing to watch someone try).  This clearly called for another stick!  Second stick obtained followed by efforts to pick that squirrel up as if it were a lovely piece of broccoli you were trying to pick up with chopsticks.  Broccoli...easy.  Squirrel...impossible.  Dave looked down at his furry little nemesis, leaned over and picked it up by it's tail and flung it in our trash bin, showing that little guy who was boss.  I'm thinking, ya know, there's no loss to one's manliness once you've chopsticked a squirrel...might as well give in and go get a bag, right?

What can I say...my guy is quite the stud. 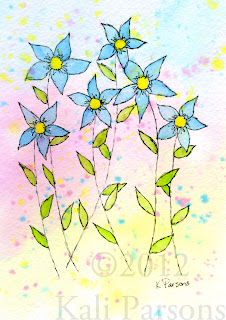