A Tale of Three Tails

Tails 1 and 2
We think Pug killed Skippy tonight. You know, our awesome purring cat and the super cool squirrel that Dave loves so. From the looks of it, it was quick. When I left the house to get the big guy from driver's ed, Pug was lying beside Skippy, both on their stomachs, both with tails behind them. The looked like inter-species BFFs...except for the "one of them is dead because the other one killed it" thing.

Tail 3
I hit Thrift Town tonight before big guy's class let out. I've been on an unsuccessful quest for a leather belt that allows for changing out the buckle. I ended up not finding one (again!), but still ended up getting 4 things. I got in line behind a young couple. Couldn't see much of him because he was all covered up. Gangsta winter hat (it's 88 degrees out) and sunglasses (we were inside). OK, saying that makes me aware that I'm so not their age any more. The young woman was lovely, and was rockin' some of those thick tribal earrings (the old lady in me thinks, boy, she'll regret those big holes someday, but truly, today, they really worked in an awesome way on her), she had the most amazing legs, long and lean, and she had a tic-tac-toe grid scarred into her thigh. But, yeah, somehow she pulled that off, too. She turned abruptly, for some reason, and something hit me. It was a tail she had clipped to her belt loop. And, I'll be darned, she made that totally work, too. The store was playing Blondie's "The Tide is High" and I decided I'd check out the other characters who were in line with me. The lady behind me was singing along softly, I dug that. Me? Yeah, I was swaying in rhythm ever so slightly.

I smiled to myself and sent her some purely gentle thoughts and lovely wishes for when she's "old". 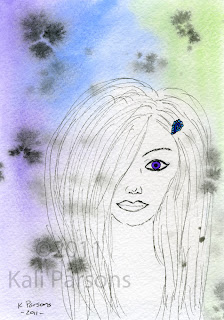