We took all technology away from our kiddos and the most amazing thing has happened. No surprise actually. Big guy has been on multiple bike rides and has been hanging out with real, live friends. I've hardly seen him today.  Little guy spent the day skateboarding and unicycling with friends. But...what was totally awesome was when my little guy and two friends hung out in the front yard working on getting a dead limb out of a tree.  It's been up there for several years, ever since a strong wind storm snapped a large branch from the top and it fell into a "Y" branch and there it has stayed...and stayed. Those little guys (OK, they're all just about my height or bigger, so not so little) strategized, schemed, gathered tools, and worked as an incredible team. Logs and boards flew through the air, sometimes hitting their mark, sometimes going astray. They all looked out for each other and made sure no one was in harm's way. Large pots were brought over to serve as stools for added height. And, finally, our extension pole with a saw on the end was requested. My little guy worked and worked and worked and finally, after much anticipation, that limb fell. It landed vertically and promptly fell toward him and being the agile little dude that he is, he jumped aside just in time. The weary, but ever-so-happy team congratulated themselves. They were fully aware of their awesomeness. And me? Lucky me, I got to sit inside and spy on the whole adventure. Made my day! 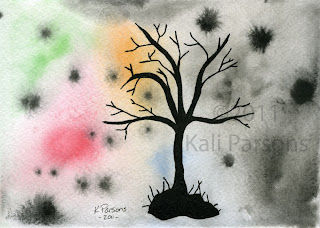 If it keeps up, man will atrophy all his limbs but the push-button finger.
~Frank Lloyd Wright
Posted by KALI PARSONS at Saturday, October 29, 2011